Posted on August 20, 2015 by Thought Development

Los Angeles, CA – August 20, 2015 – Thought Development Corp., developer of the leading workflow management system for the media promotions industry, announced that Fox Broadcasting Company (FOX) is deploying ON-AIR Pro™ to streamline workflow across the network. The system is being installed with the complete suite of ON-AIR Pro™ plugins and will integrate with a number of mission critical FOX systems, such as program scheduling and traffic and delivery.

Fox Broadcasting and FOX Special Operations group have used the system to support its workflow since 2004. After an extensive evaluation of the current version of the software, the network chose to upgrade the system across the organization. The installation will support end-to-end operations, including advanced time saving features like automating the generation of slates using the ON-SLATE™ plugin.

“We are thrilled that ON-AIR Pro is able to streamline the management of both the process and information content created by the creative teams at FOX.” commented Jonathan Mickelson – Chief Technical Officer, Thought Development Corp.

Fox Broadcasting Company (FOX), a unit of 21st Century Fox, is home to some of the highest-rated and most acclaimed series on television, including EMPIRE, GOTHAM, THE LAST MAN ON EARTH, AMERICAN IDOL, NEW GIRL, BROOKLYN NINE-NINE, THE SIMPSONS, FAMILY GUY and SLEEPY HOLLOW. FOX is the only network to ever rank No. 1 in the key adult demographic for eight consecutive seasons and continues to dominate all network competition in the more targeted Adults 18-34 and Teen demographics.

With over 15 years experience in streamlining Broadcast, Cable, Film, and Gaming Marketing, Thought Development is the premier developer of workflow systems for the media promotions industry. The company’s flagship product, ON-AIR Pro™ is designed to flexibly manage the complete on-air promotion process, as well as the changing requirements of off-air and digital promotion. With a modular interface developed exclusively for the entertainment marketing creative workflow, and built with powerful support with international content, the ON-AIR Pro™ system is used by the industry’s leading networks to unify and streamline their mission-critical promo production processes. For additional information visit www.thought-dev.com. 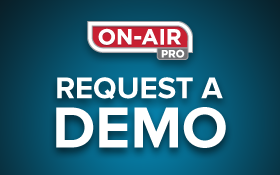